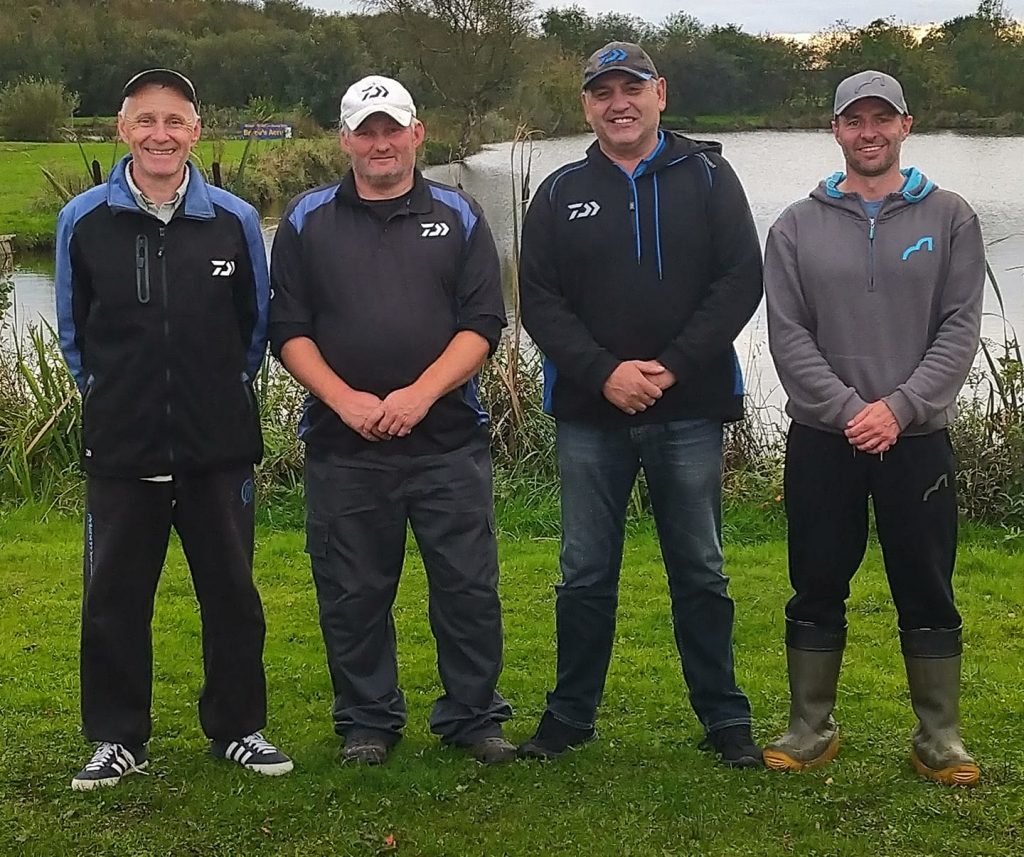 Format
Each lake will be split into sections of 6
Points will be awarded depending on where you finish in the section
First – 1 point, Second – 2 points, Third – 3 points and so on.
DNW will receive 6 points, regardless of how many anglers weigh-in or are in the section.
In the event of a tie on points, the team, if still tied, the overall weight will decide the winners

Payment can be made by the following methods:

Cash – Paid in the tackle shop

Teams entered in this event are:

A lovely dry day today after 4 days of persistent rain, but all that cold water 💦 certainly had an impact on the weights today with the fish reluctant to settle and feed for any lengthy spells.
However, fish were caught and other than section one ( end peg 31) the sections were pretty close for all.
Ian Whitson blitzed the match and won section 1 with 99lb 12oz, just 4oz shy of that magic ” Ton”… Must try harder. 😂
His partner Scott Bond managed a 3rd in section 2 to give them a 4pt total on day 1.
Mick Slater was 2nd in section with a very respectable 60lb 14oz.
Steve Royle on peg 32 in section 1 scraped a 3rd.. But his partner Barry Young had a well-fought 1st in a very tough section 2 to also give the pair a 4pt total.
Myles Watt and partner Simon Heyes scored a 4th and a 2nd to keep them in contention going into tomorrow’s match on Queensberry Water.
Very little separates the remaining pairs going into day 2 – all to fish for tomorrow. 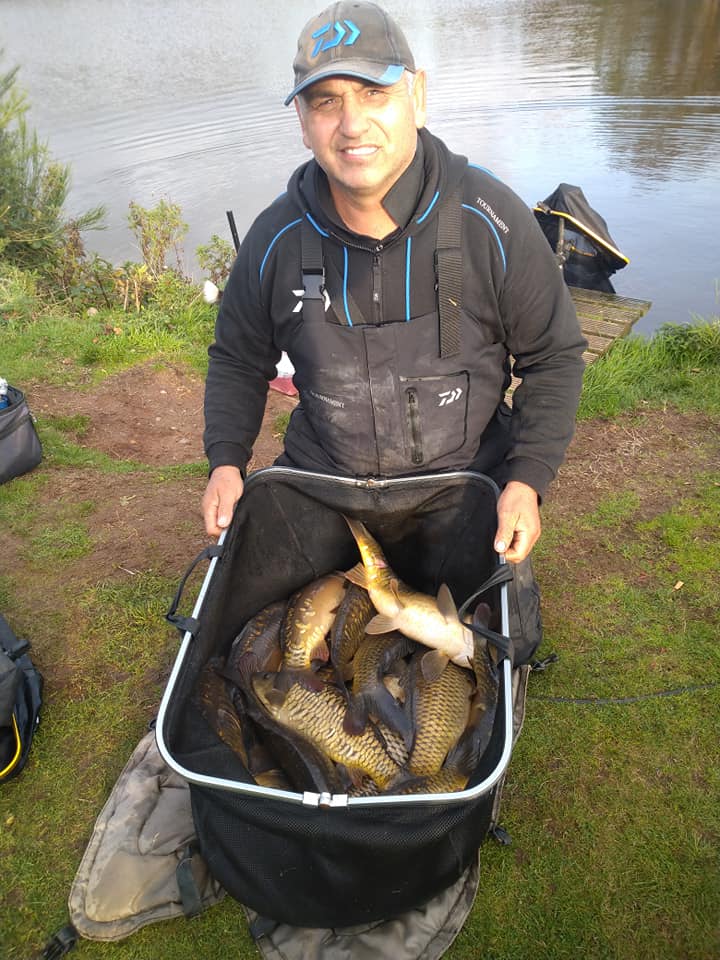 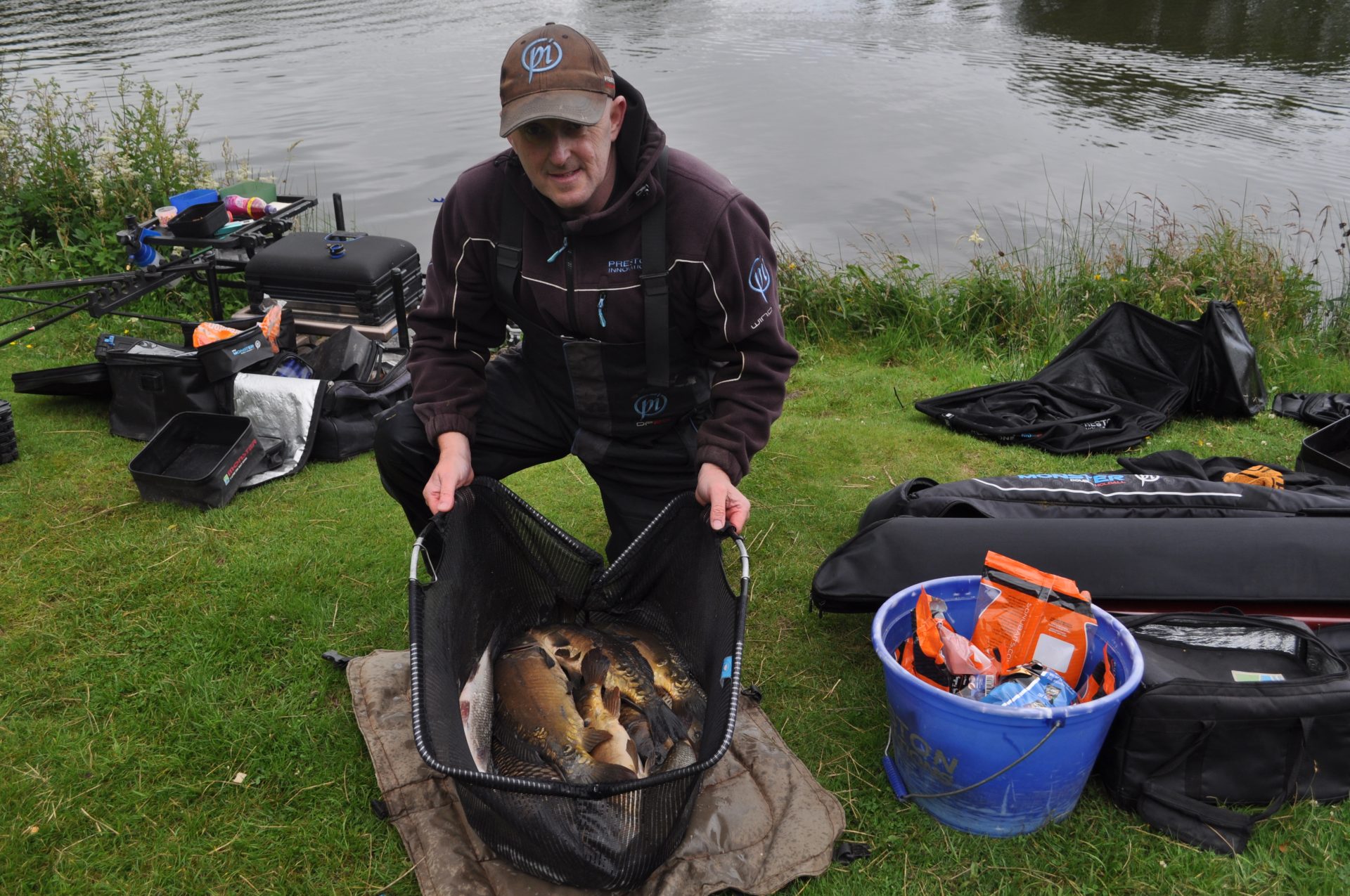 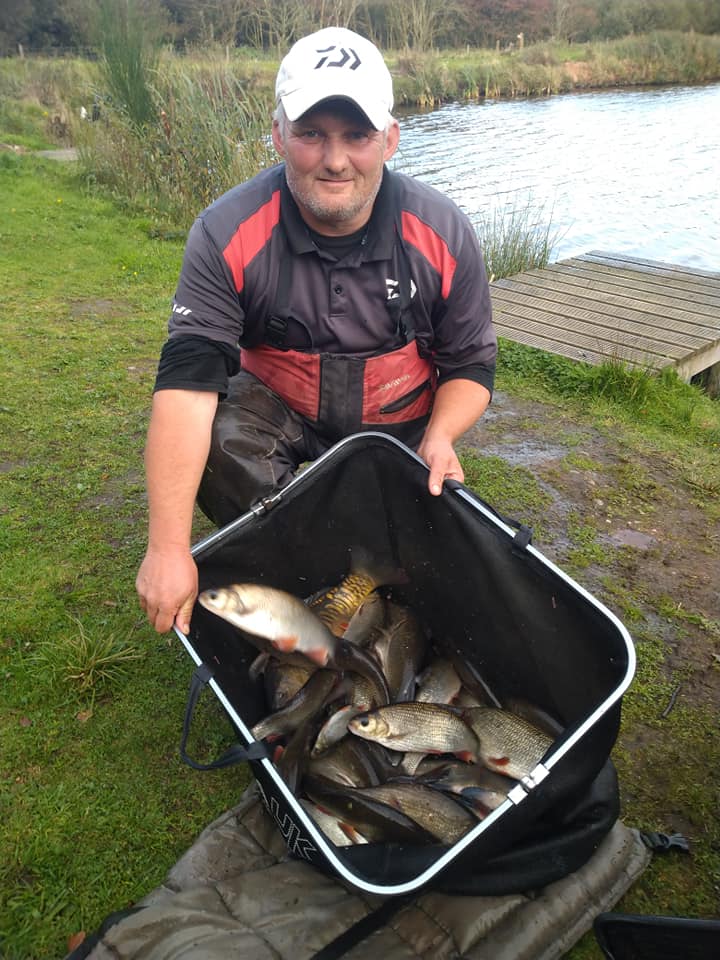 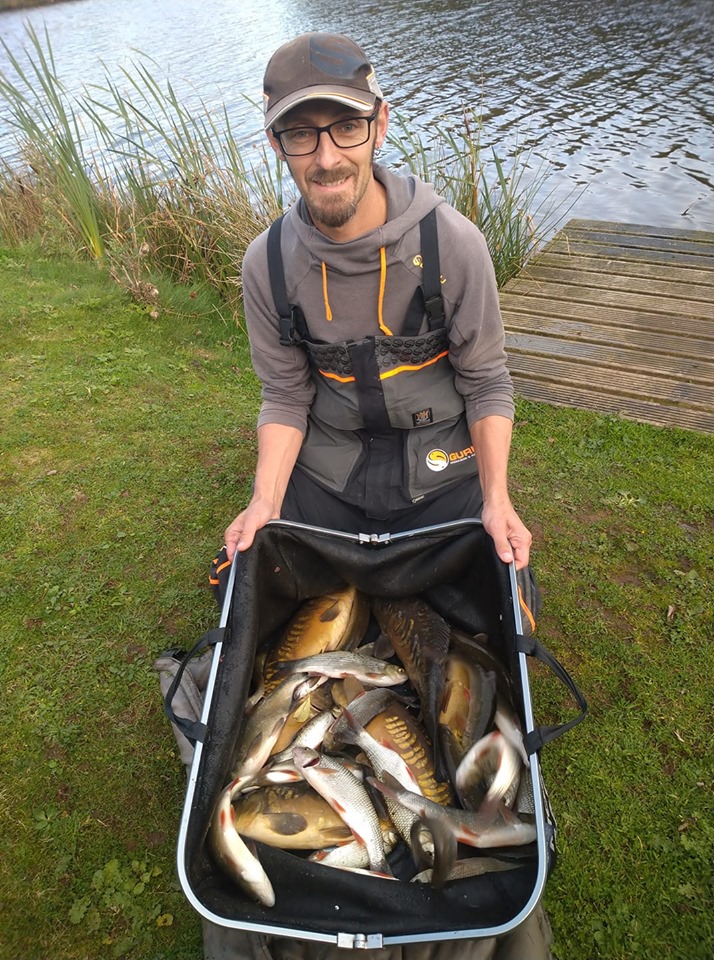 Firstly to today’s match, a very wet start and even wetter night, a lot cooler with temps around 13° c. A northerly wind with gusts up to 18mph at times.
Not ideal conditions at all.!!
At the start of play, we had two pairs tied on 4pts, Ian Whitson / Scott Bond, & Barry Young / Steve Royle.
Myles Watt and Simon Heyes lay just behind on 6pts, with the chasing pack not far behind.
At the draw, someone was looking down on one pair, with Steve Royle drawing end peg 30 in his section, and Barry Young drawing end peg 15 in his.!!
Ian Whitson and Scott Bond had drawn decent pegs too in pegs 19 & 24.
With some quality anglers throughout the lake and some on very good pegs, it was all to fish for…
It soon became apparent that all that overnight rain had slowed things up considerably, with bites on all methods very patchy and slow at the best of times.
It was all about tactics and being patient today with the anglers making every bite count.
Barry Young started on a method feeder on a usually very good feeder peg but could only muster 4 small carp, however he stuck it out on a 13m pole line to catch ide and skimmers of all sizes with two carp in the margin late on to weigh in 49lb 6oz, getting him a valuable 2nd in section.
Rosen Arsov had a few carp on the method feeder on peg 20, but again the fish wouldn’t settle. Rosen then had a nice run of carp on the pole to win section 1 with a hard-fought 54lb 2oz and also won the lake overall.
Myles Watt fished hard to get a 3rd with a few silvers on the pole, and a few carp on bomb and pellet for 43lbs.
Meanwhile, Scott Bond had struggled a bit on peg 19 but did manage a few carp on the pellet waggler… A familiar pattern on the lake today with lots of usually productive pegs not producing the goods.
Section 2 would be interesting and we knew there would be fine margins in the weights and points after the way the top half had fished.
Ian Whitson did the business in section 2 catching a nice net of silvers on the pole, but again no carp. Ian stuck it out to put 36lb 2oz of ide and skimmers on the weigh sling, earning a valuable point for his pair.
The weights then dipped a bit, but Mr reliable Mick Slater nicked an envelope by default with his well earned 26lb 8oz.
Down to the last peg, and Steve Royle. He was claiming 25lbs before the scales reached him ( and he’s usually a bit of an underestimatior.. If there’s such a word?!!!)
Steve fished for silvers all day, and true to form when the scales reached him, 34lbs was called.!! Lots of little ide, chub and roach made up his net of fish., but more importantly, a second in section for his pair.
Overall the weather hasn’t been too kind, with all the weeks’ rain and cooler temps impacting on the fish and fishing considerably, but well done to everyone for sticking at it, it may have been tough, but it was a bit of a leveller as far as the matches went. 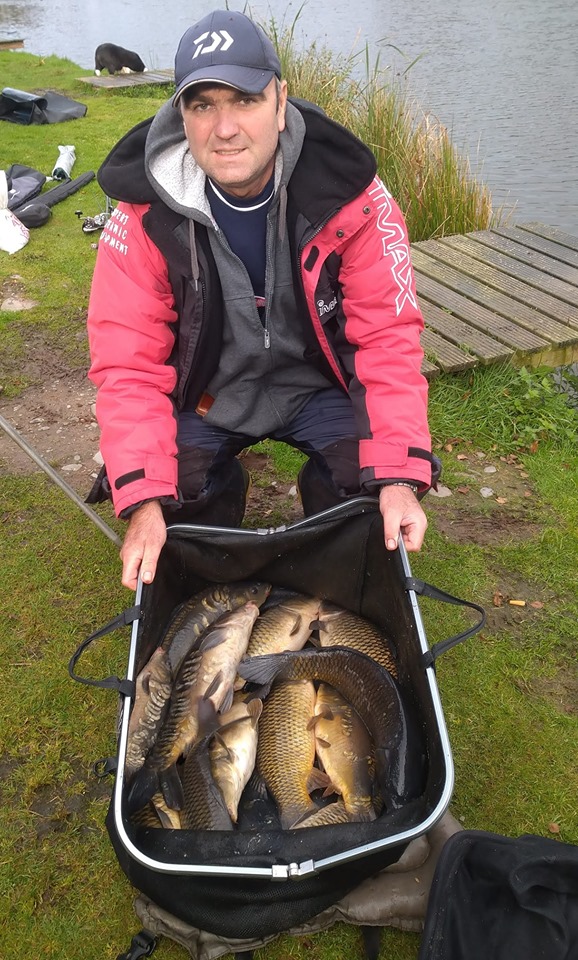 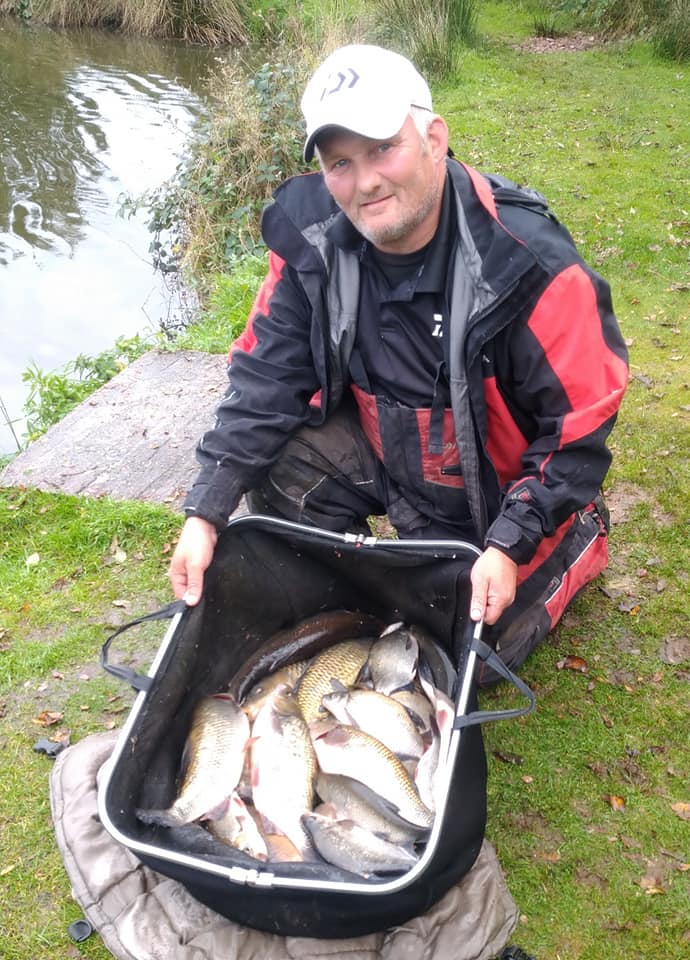 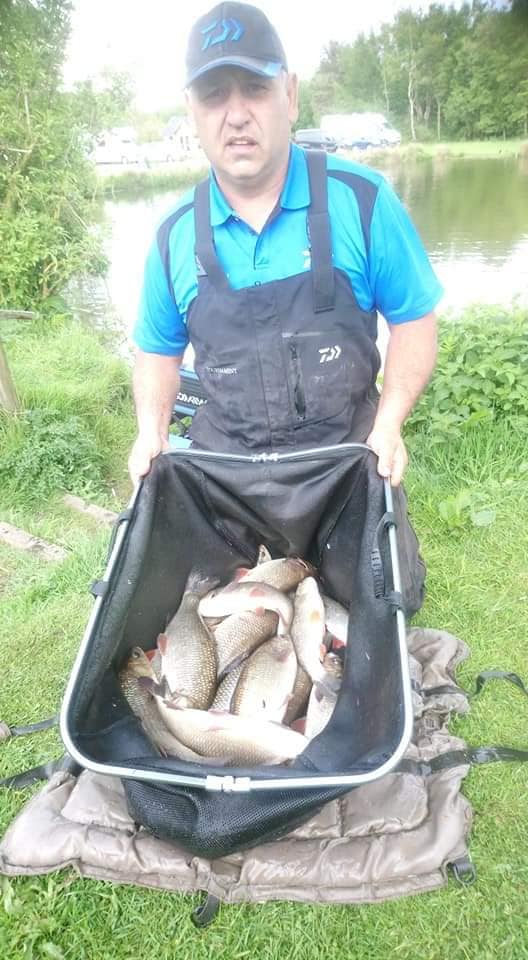 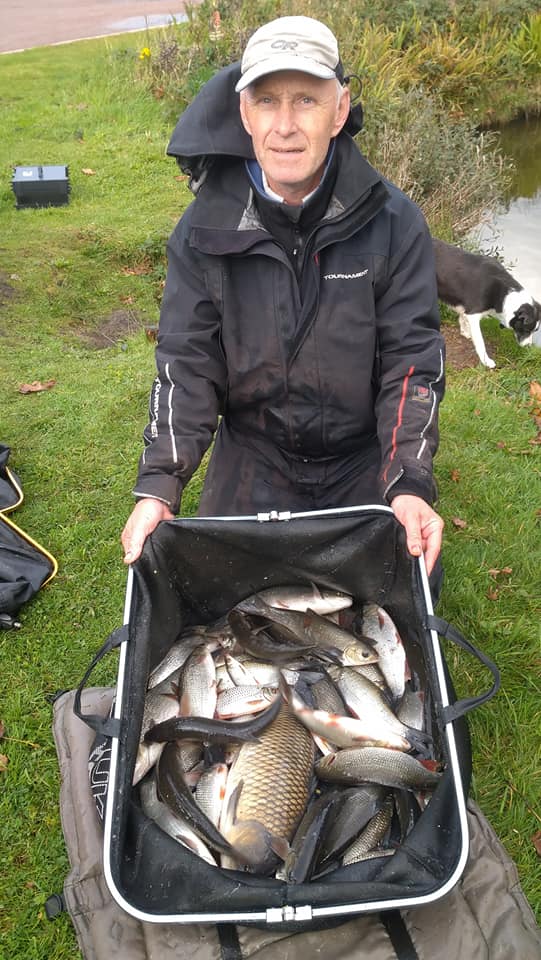 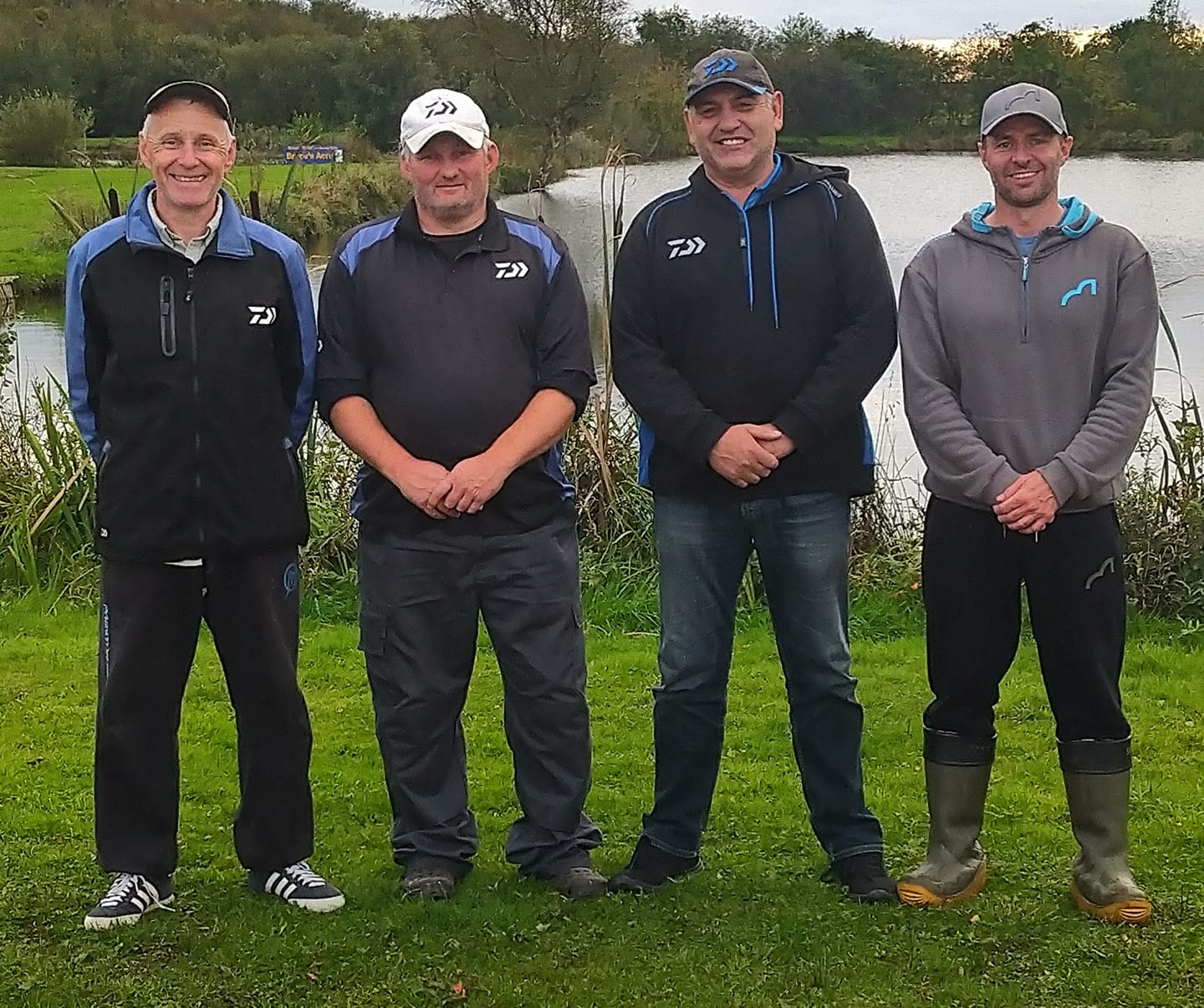 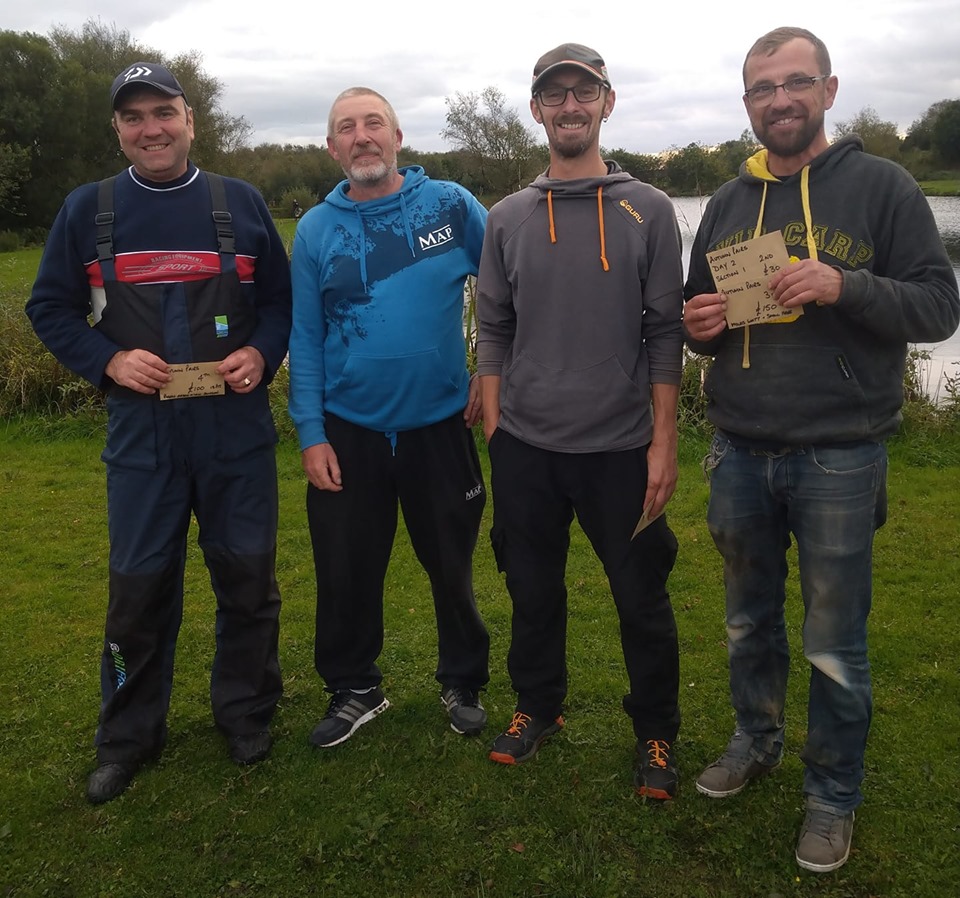 Many thanks to everyone who travelled from far and wide to support and fish the pairs festival weekend, the weather wasn’t too kind and the fishing quite challenging at times, but credit to you all for sticking at it.